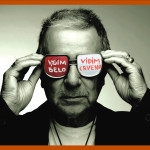 Predrag Pedja Neskovic ( born September 13, 1938, Bijela, Montenegro ) is one of the most famous painter of contemporary art in Yugoslavia and Serbia. He started working in the mid sixties of the 20th century. His works incorporate kitsch, trash and art ameterizma in ironic context of their relations with the media and consumer culture. With his opus, Neskovic has achieved one of the most respected painter in the Yugoslav and Serbian art.

He graduated at the Academy of Applied Arts in Belgrade in 1965 in class of prof. Mihailo Petrov. His first solo exhibition was held in Belgrade in 1965, and since then has regularly exhibited in the Yugoslav’s cities and abroad. His works are part of major public and private collections, including the museums in Belgrade, Skopje, Zagreb, Rijeka, Berlin…

Predrag Neskovic entered at the art scene in the early sixties with paintings that were interpreted as Belgrade’s “figurative painiting” with elements of pop-art and art-brut. The attention of the art public Neskovic turned with his series “aircrafts” which was exhibited in the Museum of Contemporary Art in Belgrade in 1967.

In the early seventies his painting was in connection with the philosophy of Radomir Konstantinovic, especially with his book “Philosophy of Province”. Konstantinovic wrote about Neskovic’s painting as a revolt of institutional high modernist art. In the “joyfull colors” of Neškovic paintings Konstantinovic saw “cold bottomless in the space of gaps ” represented through the “metaphysics of absurdity”.

Since the beginning of the seventies Neskovic used items purchased on “flea markets” and used them as “models” in his paintings and placed them in the relations of parodies.
Some of these “models” stand out as signs that he often used to reflect the relationship between “low” and “high” culture within the artistic legacy and national myths: Naked Maja, Kosovo Maiden, Hansel and Gretel, Superman, swan, dogs and cats, Hasanaginica, Little Red Riding Hood, plastic palm tree, the hunter and the fox, etc. These “models” Neskovic mapped in the artificial context of “academic” painting.

In the early eighties, critics compared Neskovic’s work with American “bad painting”, Italian avant-garde art movement and German neo – expressionism and in the context of the “new image” he will be recognized as one of the Yugoslav predecessors of these artistic movement in the world.
During the eighties his painting became darker and darker and somehow “mysterious”, but not “more serious”. With these paintings he hint growing and practicing “political use of kitsch” when it comes to all the powerful nationalist rhetoric of the Serbian culture and art and it was completely rejected by Neskovic. Nešković’s “catalog of figures” is being supplemented with symbolic and abstract forms: various tube and star shapes, concentric and spiral vortices…
In the late eighties, Neskovic again lighted up his palette and returned to his previous interests for kitsch and amateurism and then he produced one of his most famous series, “Gobelins”, which exposes the first time before the start of the civil war in Yugoslavia in 1991. Neskovic became one of the first art critic about triviality of nationalist myths.
During the civil wars of the nineties Neskovic has been worked on his ” War cycle”, a series of several hundred acrylic on paper, which was exhibited at Belgrade’s Museum of Contemporary Art in 2005. Writing about this series Dejan Sretenović notes that these images are “sort of mirror of provincial infantilism who find happiness in the accident, kitsch in violence, idiocy in severity policies, builds a protective mechanism of avoiding any liability for reality and never resolved the conflict with itself “.

In the first decade of the 21st century Neskovic remains for one of the most active artists on the Belgrade art scene. Among those he made a large size of paintings (from series „Openly“, acrylic on canavs). These large-format paintings were made in systematically painting the entire surface of the canvas with vertical “strips” resembling ordinary “decorator’s work”. Neskovic first covers entire surface of the canvas with one colour, and than repeats procedure using different colours across the “strips” already defined by the width of the roller, so that a picture is filled with twenty or thirty uniform spreads of different colours. The repeating motive of Neskovic’s  work method is based on his characteristic ironic play with infinity of space and time.

In the same time Neskovic continues to enrich his collection purchased on “flea markets” and according to the collection he created the installation of these items, such as series of “Wall clocks”.

In 2014. was published first major monograph about Neskovic’s work, written by Prof. of History and Theory of Art, Branislav Dimitrijevic. The author represented Neskovic’s work in the time of rapid changes in society and in the history of art from the beginning of the sixties.

Specificity of Neskovic procedure and thematic framework is interpreted as “overcoming the proverbial frustration artistic entity in Serbia before the fracture between the world and province, what is the artist’s tireless attention to this problem”.

Neskovic has been the recipient of numerous awards, among others:
1965 Prize of Annals, Rovinj
1966 The 1st Prize for Painting, IV Biennial of Youth, Rijeka
1968 Radio and Television Prize, Belgrade
1985 „Ivan Tabaković“ Prize, Serbian Academy of Sciences and Arts, Belgrade